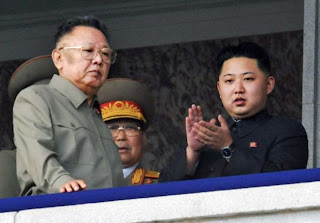 Kim Jung Il has done what every one else who preceded him, he died.

Perhaps his son will reform the crap government of North Korea and allow its people to eat and enjoy some freedoms and even reconcile with South Korea.

PYONGYANG, North Korea (AP) — North Korea announced the death of supreme leader Kim Jong Il and urged its people to rally behind his young son and heir-apparent Monday, while the world watched warily for signs of instability in a nation pursuing nuclear weapons.

People on the streets of the North Korean capital, Pyongyang, wailed in grief, some kneeling on the ground or bowing repeatedly as they learned the news that their "dear general" had died of heart failure Saturday at age 69 while carrying out official duties on a train trip.