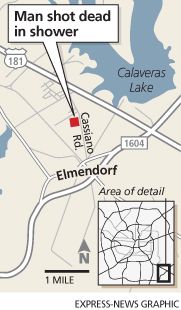 Who knows why this happened?

A burglary gone bad, revenge, or whatever?

Hopefully they'll find enough evidence to put together a case and find those responsible for this.

Rest in Peace Mr. Ortega and peace unto your family.

Bexar County deputies are investigating the shooting death of a man whose body was found in a shower in South Bexar County on Sunday evening.

Mark Ortega, 42, was shot multiple times and killed in the shower in a building in the 14800 block of Cassiano Road, in the city of Elmendorf, according to Deputy Chief Dale Bennett, spokesman for the Bexar County Sheriff's Office.

Sgt. Ray Pollard said Ortega's wife left the home in the morning for work, and returned home around 7:30 p.m. after going grocery shopping. After she couldn't find her husband to help her unload the groceries, she walked around the home shouting his name, then saw blood on the concrete outside a hangar where Ortega worked on experimental planes, Pollard said.