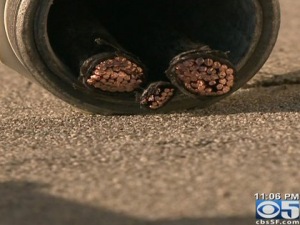 Perhaps the church might want to invest in some perimeter video cameras or a watch guard?

ANTIOCH (CBS / AP) — Officials of an Antioch church are looking at thousands of dollars in repairs after the church was hit by thieves for the fourth time in two months.

The Contra Costa Times reports that thieves stole about 500 yards of copper wiring from a conduit outside St. Ignatius of Antioch Catholic Church early Thursday.

A church official told the newspaper that in three previous incidents since mid-July, thieves have stolen about 1,000 yards of copper wiring, seven air conditioning units and five outdoor security cameras.