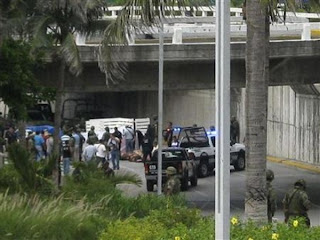 And the hits keep on coming in the Mexican Drug Wars.

The bodies were dumped under the overpass in broad daylight during rush-hour no less.

With gunmen standing guard as it happened.

Is there anyone left in Mexico with the cojones to take it to the Cartels?

MEXICO CITY (AP) — Suspected drug traffickers drove two trucks to a main avenue in a Mexican Gulf coast city and dumped 35 bodies beneath an overpass during rush hour as gunmen stood guard and pointed their weapons at frightened drivers.

Horrified motorists trapped at the scene grabbed cell phones and sent Twitter messages warning others to avoid the area on a thoroughfare near the biggest shopping mall in Boca del Rio.

The gruesome scene Tuesday was a sharp escalation in drug violence in Veracruz state, which sits on an important route for drugs and Central American migrants heading north.