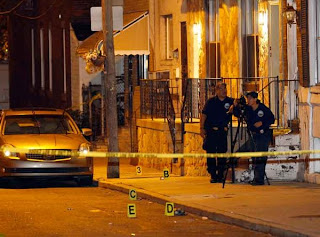 These girl mobs are seriously getting out of hand.

The mob mentality is now getting innocents shot.


Impulsive and animalistic behavior seems to becoming a norm.

2-year-old shot in mob brawl in S. Philly
By Robert Moran, The Inquirer

A critically wounded 2-year-old girl was among four people shot Tuesday night in South Philadelphia when a mob of girls charged a house and gunfire erupted in a dispute stemming from a high school fight, police said.

A 10-year-boy and a 59-year-old woman, who live in the same house as the toddler, also were wounded and were hospitalized in stable condition. A 25-year-old man was shot in the finger.

Police were called at 7:31 p.m. to the 1200 block of South Bucknell Street in response to a report of a melee and gunfire.