Protesting in your underwear 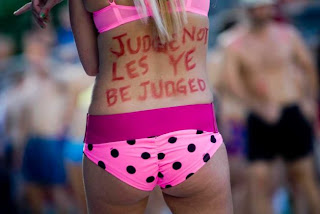 You don't like the conservative nature of Utah and its laws?

Running around in your underwear will only (ahem) harden their position.

SALT LAKE CITY (AP) — Thousands of people stripped to their underwear and ran through Salt Lake City to protest what they called the "uptight" laws of Utah.

Undie Run organizer Nate Porter says the goal of the event Saturday was to organize people frustrated by the conservative nature of the state's politics.

Nudity was prohibited by organizers. Participants donned bras, panties, nightgowns, swimwear or colorful boxer shorts — and some added political messages by expressing support for causes like gay marriage on their chests, backs or legs.