Monkey on her back? 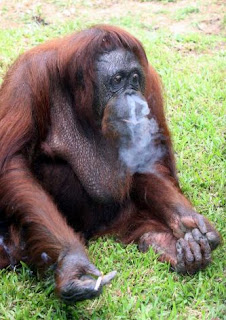 Boy is she going to be grouchy!

KUALA LUMPUR, Malaysia (AP) — A captive orangutan often spotted smoking cigarettes given to her by zoo visitors is being forced to kick the habit, a Malaysian wildlife official said Monday.

Government authorities seized the adult ape named Shirley from a state-run zoo in Malaysia's southern Johor state last week after she and several other animals there were deemed to be living in poor conditions.

Shirley is now being quarantined at another zoo in a neighboring state and is expected to be sent to a Malaysian wildlife center on Borneo island within weeks.