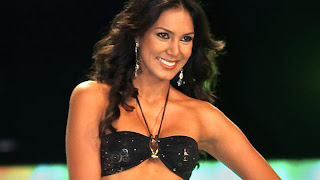 She head to be told this?

Robayo, one of 89 beauties from around the world competing to win the Donald Trump-owned contest, has been reprimanded for making appearance in tiny skirts - with no panties.

"Colombia had to be spoken to and told she needed to wear underpants as what she was doing was totally inappropriate," a source told Fox News. "People have been pretty upset by it; there have been photos and media appearances where she has completely had her crotch out."