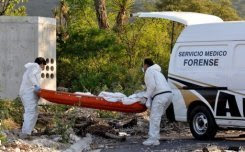 When will the Federal Government in Mexico regain control of its internal affairs?

This is getting to become out of hand.

The bloodstained bodies of a man and a woman were found hanging from a bridge in northeast Mexico Tuesday, along with threatening messages to people who report drug violence on social networks.

The messages lay near the two bodies, found half naked, alluding to websites set up for people to report drug violence in the area, police said.

"That will happen to all of them," read the text of one message signed with the letter 'Z' usually associated with the Zetas drug gang.