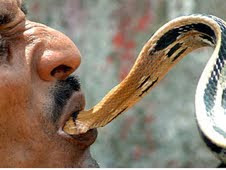 Now this is news!

Of course alcohol was involved.


Man arrested for biting live python in "unprovoked attack"
A California man, named by police as David Senk, has been arrested on charges of unlawfully maiming or mutilating a reptile after he allegedly bit into a pet python.
metro.co.uk -

The 54-year-old reportedly bit the python while drunk, leaving the snake badly injured and in need of urgent medical care.

Police found Senk lying on the floor with blood on his face in Sacramento after an emergency call from a couple who claimed he had taken two bites out of their pet.

Sergeant Andrew Pettit said of the incident: 'There was nothing to indicate that the snake provoked him at all.