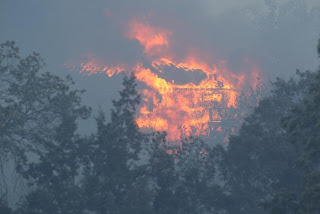 Now its getting close.

Its about 80 miles or so from where I live.

In a summer where brush fires have become a near-daily occurrence, firefighting officials said the multiple wildfires that raged across Central Texas on Sunday were the worst the region has seen all year.


Numerous wind-driven fires pushed fire departments to their limits and forced evacuations in Bastrop County, the Steiner Ranch subdivision, Pflugerville, Spicewood and other areas. Scores of residents were left wondering whether they had homes to return to as many of the fires continued to burn Sunday night.

The largest and most destructive fire was in Bastrop County, where a blaze burned 14,000 acres and grew to an estimated 16 miles long by the end of the day, said Mark Stanford, fire chief of the Texas Forest Service.