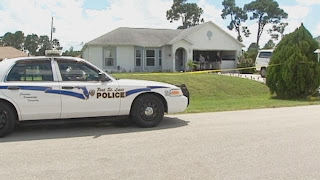 What did he finally snap because he realized she just married him for his money?

Okay that was mean of me to say that.

I am sorry she was murdered, may she rest in peace.

Police believe a 78-year-old man shot and killed his 21-year-old wife early Saturday, then set their home on fire before killing himself.


It happened at about 1:15 a.m. in a quiet neighborhood on Southwest Kamchatka Avenue.

"A white male called 911 and said he had just killed his wife and was going to kill himself," police spokesman Tom Nichols said. "Before he turned the gun on himself, he set the house on fire."