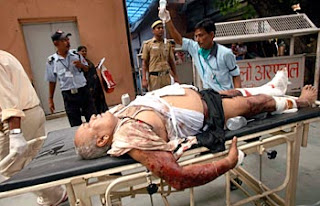 One way to get a court continuance I guess.

I hope they find the bastards that did this.

Terror struck Delhi when a powerful bomb placed in a briefcase ripped through a crowded reception area at the entrance to the Delhi High Court on Wednesday morning, killing 11 people and leaving more than 60 injured. This is the second blast at the high court since May.

The blast occurred around 10:15 am outside Gate Number 5 close to the reception area where visitors had lined up for entry passes.

A group by the name Harkat-ul-Jihad claimed responsibility for the blast. The mail claimed that the blast was carried out to demand repeal of death sentence of Afzal Guru, a condemned prisoner in Parliament attack.