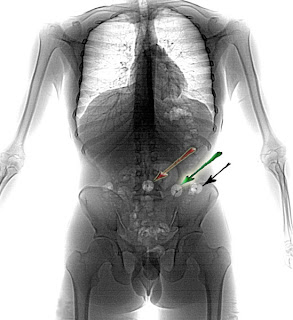 Euww, are they going to let nature takes its course?

Thief who swallowed diamond is caught on X-ray
AFP -


A thief in Spain who stole a diamond from a British woman -- and then swallowed it -- was caught when police stopped him at a checkpoint and forced him to undergo an X-ray.

The theft occurred when two British women entered a restaurant in the luxury southern resort of Marbella and one of them left her handbag on the floor by her chair, police said in a statement.

"Two well-dressed men came in, one sitting at the bar and the other next to the woman," it said.