I pray for the children 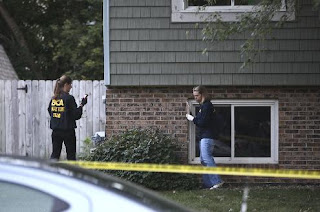 What a horrifying sight for that poor child to see.


My prayers go out to her brothers and her.

A man and two women found dead in an Oakdale house each died of a single gunshot wound to the head in an apparent double murder-suicide, the Ramsey County medical examiner's office ruled Friday.

The shooting scene at the blue split-level house, which involved two parents and a babysitter, left other victims as well. A 6-year-old girl returning home from school Thursday found the bodies and ran screaming into the street with blood on her hands. She and her two brothers, ages 3 and 8, were left orphaned.

"When I heard the child found the bodies it really did break my heart," said Washington County Attorney Pete Orput, who expects the county might be asked to help with foster care. "I don't know what it would be like walking in to see your mom and dad dead. That's something that child will never get out of her head, ever."