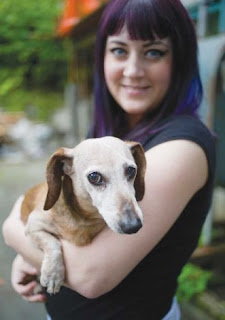 She saved her dog.

In my book she was brave.  Cute too!

JUNEAU, Alaska (AP) — A Juneau, Alaska, woman says she knows it was stupid to punch a black bear in the snout to save her dog.

But Brooke Collins says the attack happened so fast that all she could think about is keeping her dachshund, Fudge, from being killed.

The 22-year-old says as soon as she let her dogs out Sunday, Fudge started barking and she saw the bear carrying him like a salmon.