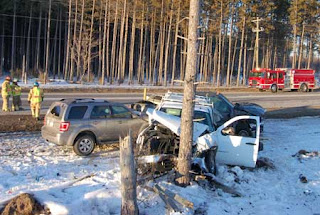 You want to kill or maim yourself?  Fine, go do so; drink to your heart's content, get into your car and drive into a tree.  Fine.

But usually there are other folks out on the road.  Folks who want to get home in one piece.  Folks who are responsible citizens.  They don't want you crashing into them and if they're not hurt they've suffered damage to their vehicles and in some cases, probably a lot of times, also suffer from the trauma of having been in an accident with your sorry drunk ass.

Do all of us a favor.  If you must drink and must get in a car, do so, then take a gun out and shoot yourself in the head.  If you don't want to do that then stay at home or get a taxi.

This has been a public service announcement.

A woman who police say smelled of alcohol suffered serious injuries after a traffic accident north of downtown early Sunday.

The 37-year-old woman from Lytle was driving her Jeep Liberty northbound on U.S. 281 near Basse Road shortly after 2 a.m. when she got into an accident, San Antonio police said.