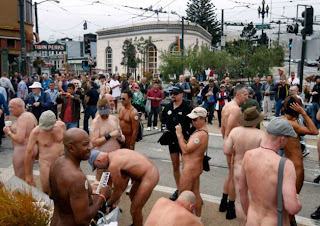 Apparently not to be outdone by the folks from Utah San Franciscans hold a nude protest.

SAN FRANCISCO (AP) — Hanging out on a street corner has taken on new meaning in San Francisco.
Several dozen men and at least one woman took part in a naked protest Saturday in an area of the Castro District neighborhood that has become known for its nude visitors. Several carried signs that read, "Nudity is Not a Crime" and "Get Your Hate Off My Body," as they milled around, undeterred by the brisk weather and light mist.

Supervisor Scott Wiener's proposal would require the clothing-averse to cover up in restaurants. It would also require nudists to put a cloth or other barrier under their bottoms if they take a seat in public.