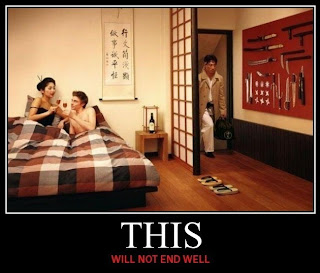 Don't get me wrong what happened to the boyfriend was unlawful.

It was wrong but its hard to work up much sympathy for him.

A man was rushed to the hospital with life-threatening injuries late Thursday after he was stabbed by his girlfriend's estranged husband on the Northwest Side, San Antonio police said.

Authorities said the woman and her husband split two weeks ago over an alleged affair. The victim had been at the home the couple once shared in the 5200 block of Meadow Field when the woman's estranged husband and his brother kicked in the door and stabbed the woman's friend, police said.

The men fled in a beat-up red car and were apprehended at their mother's residence in the 500 block of Tomar, police said.