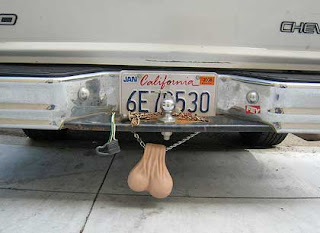 Really?  This is going to trial?

BONNEAU, S.C. (WCSC) - A Bonneau woman wanted to make a statement, so she decorated her truck with a set of red plastic testicles. And now a jury gets to decide if she was exercising free speech or being just obscene.

Virginia Tice was given a $445 ticket July 5 that accuses her of violating the state's obscene bumper sticker law.

And other than a hefty fine, the ticket is causing a huge controversy that extends far past the Bonneau city limits.