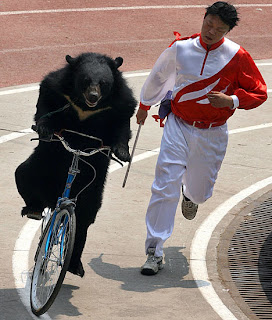 That is one rude bear!

PANAMA CITY, Florida - A Panama City man is recovering after colliding with a black bear while riding his bike to work.

John Hearn said he saw something out of the corner of his eye early Thursday morning. The nearly 300-pound bear smacked him off his bicycle and then fled into some nearby woods. Passing motorists stopped to help Hearn, who sustained minor injuries. The back tire of his bike was also ripped off.

Hearn, who bikes to work at Tyndall Air Force Base a few times a week, said he still plans to bike to work.