Fight over a balloon? Just ask Pennywise, he has plenty. 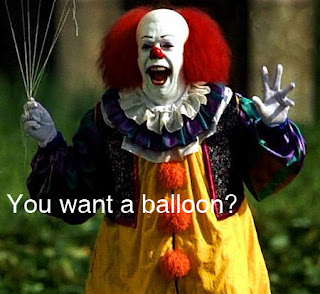 I thought the Wisconsin capitol had gotten back to relative normal.

MADISON, Wis. (AP) – Police are investigating an apparent fight over a balloon that left the state Capitol floor splattered with blood.

Capitol Police Chief Charles Tubbs says a female citizen and a male state employee got into some kind of argument over the woman’s balloon near the end of the noon hour in front of the state Supreme Court hearing room.

Tubbs had no other details, saying investigators are still gathering information about what happened next. Asked whose blood was splattered on the floor, he said only that the woman apparently wasn’t hurt and investigators were still assessing whether the worker had been injured and whether a weapon was involved.