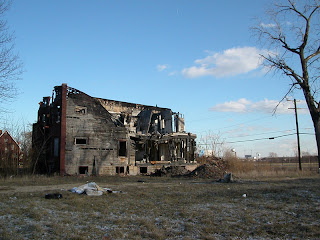 Back to the devolution.

It sounds like its horrible but its a rational plan from what I can tell.

DETROIT - Detroit neighborhoods with more people and a better chance of survival will receive different levels of city services than more blighted areas under a plan unveiled Wednesday that some residents fear may pit them against each other for scarce resources.


Mayor Dave Bing released details from his Detroit Works Project, calling the changes a "short-term intervention" necessary because the city, with limited financial resources, a $155 million budget deficit and a dwindling population, was spread dangerously thin.
"Our focus is going to be on the people in the neighborhoods," Bing said. "We can effect real change and improve neighborhoods."
The rest of the story:
Posted by Sam at 7:33 AM