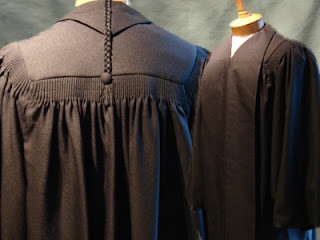 Or was it robe rage?

PHILADELPHIA (AP) - A sticky-fingered person might be wandering the streets of Philadelphia in a flowing judicial robe.

A municipal judge on Wednesday said he had his official garb taken from the robing room at the city courthouse while he was in the men's room. Judge Joseph Waters Jr. says he had left the door of the room unlocked.

The Philadelphia Daily News reports that an email was sent out to judges and courthouse staff asking people to keep an eye out for the missing garment.

Waters is a former police captain who was appointed to finish out another judge's term in 2009. He won election later that year.
Posted by Sam at 8:00 AM