A deal too good to be true 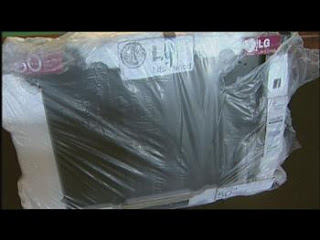 ARLINGTON -- The flat-screen TVs looked real, and the price seemed too good to be true.
They were labeled $1,999, but the man was selling them for $300 each.
Shanae Johnson said she talked the man -- who was selling them out of a Cadillac in a south Arlington parking lot -- down $50 and bought two for $500.

"We were really happy because we got such a good deal," said Tim Johnson, her husband. "When it was wrapped in bubble wrap, it appeared to be exactly what it was purported to be, a real flat-screen TV. But when you unwrapped it, it was just plywood."

The salesman would not give Shanae Johnson a phone number, Tim Johnson said. Shanae Johnson also tried to get the license plate number from the car hauling the televisions, but the man said she should leave if she needed that.

The price of the TVs, coupled with the salesman's reluctance to share any personal information, should have been a red flag, according to the Better Business Bureau.