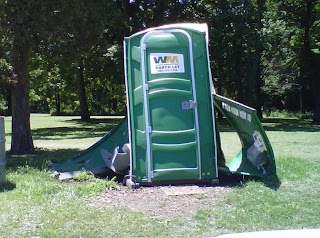 It must gbe some sort of secret weapon.

I am glad the airman will recover.

ROCKHAMPTON, Australia - A man from the Royal Australian Air Force suffered life-threatening third-degree burns after a portaloo exploded Monday at an airport Down Under -- an incident connected to an ongoing US-led military exercise in the area, The Courier-Mail reported.

Officials believe the man was using the portable toilet (also known as a port-a-potty) at Rockhampton Airport, in the state of Queensland, when he lit a cigarette.

"There was some sort of explosion," a Department of Community Safety spokeswoman said. "He suffered burns to his head, face, arms, chest and airways."