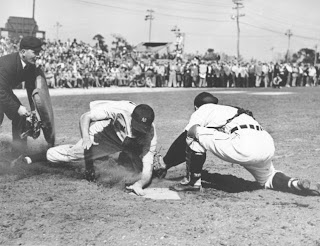 Okay once I could understand.

Twice?  Especially after being warned?

That starts to sound like it was deliberate on the part of the prosecution.  If the Judge finds it was prosecutorial misconduct he could declare that Double Jeopardy attached and the case will be over.

WASHINGTON — The criminal case against Roger Clemens, born three years ago in the cauldron of a contentious congressional hearing, collapsed Thursday when a federal judge halted the baseball great's trial on its second day of testimony due to prosecutorial misconduct.

U.S. District Judge Reggie Walton, a no-nonsense jurist nominated to the federal bench by President George W. Bush, declared a mistrial late Thursday morning after government lawyers played a videotape to the jury that contained evidence the judge had earlier declared could not be  presented.