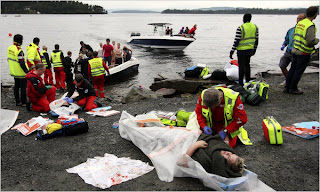 Some organization calling themselves Ansar al-Jihad al-Alami, or Helpers of the Global Jihad is apparently claiming responsibility for these heinous acts of cowardice.

Others say that groups was previously unknown  and may not even exist.

It will take awhile to sort this all out.

Our prayers go out to the families and good people of Norway.


SUNDVOLLEN, Norway (AP) -- Norway's national news agency says police are investigating whether a second suspect was involved in a shooting spree on an island where 84 people were killed.
Police have arrested one man on preliminary charges in the massacre and a bombing in Oslo hours earlier.
NTB is reporting Saturday that witnesses told police two people were involved in the shooting on Utoya island. The agency says police are looking into it.
The agency says that the second man apparently wasn't disguised in police uniform. The man under arrest was wearing a sweater with a police emblem on it.
In total, 91 people were killed in the two attacks.
Posted by Sam at 7:51 AM