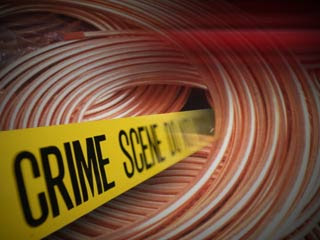 This stealing of copper and other metals is really getting out of hand.

The folks doing this are low-down scum, pure and simple, in my opinion.

'It just kills the mood of what's going on'
By Lindsay Cohen - KomoNews.com

The scrap metal thieves who hit Gilda's Club probably didn't realize that they were stealing from kids, some of whom are battling cancer.

“We work so hard in our community. We’ve touched thousands and thousands of lives of people touched by cancer, and now we have to find $10,000 to fix this,” said Anna Gottlieb, the club's executive director. “It’s going to be a real struggle to get everything fixed and up and running again.”

The non-profit discovered the missing copper early this week. Someone called police after seeing two men running from the back of the building late last week, according to a police report. When an officer investigated, he found the copper wiring and pipes missing from two large heating and cooling units behind the club, at 1400 Broadway on Capitol Hill.