No sympathy for the devil 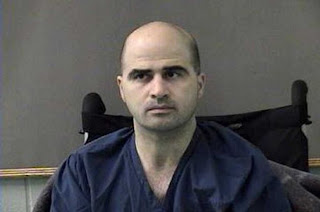 Fry his ass and then let him rot in Hell.

Then look closely at those who ignored the facts and realities surrounding Hasan and cashier them out of the service.

The Army said Wednesday that Maj. Nidal Malik Hasan, accused of killing 13 people in a rampage at Fort Hood in 2009, will face the death penalty.

Lt. Gen. Donald Campbell Jr., the post's commander, ordered a capital murder trial after reviewing the recommendations from an Army colonel who presided over an evidentiary hearing last year.

The decision sets the stage for the case to go to trial most likely in about a year. While Campbell ordered a court-martial that allows prosecutors to seek the death penalty, the Army psychiatrist must still be arraigned and a judge must be selected. Besides 13 counts of premeditated murder, Hasan faces 32 specifications of attempted premeditated murder.