Superman in Jeans and a T-Shirt?? 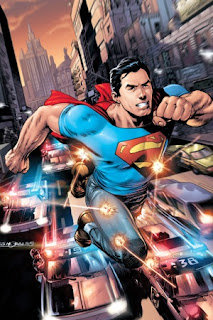 They have messed with Superman.

Here's the cover to the first "Action Comics" No. 1 in 73 years -- and the latest version of Superman is part E.T., part Paul Bunyan and even a little Bruce Springsteen.

"This is a young Superman who still believes a better world for everyone is possible," said writer Grant Morrison, who'll be chronicling the Man of Steel's days as the world's first superhero when DC Comics relaunches its entire line of comics in September.

The Post got a sneak peek ahead of this week's San Diego Comic-Con.

While most of the titles, including "Batman" and "Green Lantern," will showcase DC's iconic heroes when they're well into their careers, "Action Comics" shows the earliest adventures of Superman, who's initially a bluejeans-and-T-shirt-wearing crimefighter with a small red cape.