What a golden nugget 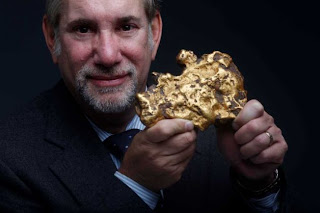 Damn!  Its as big as his head!

Who cares where it came from?

NEVADA CITY, Calif. (AP) — A 6.2-pound hunk of gold was auctioned for nearly half a million dollars in March after a man claimed he found it on his Sierra Nevada property, but it turns out it was actually dug up decades earlier in Australia.

After Jim Sanders' "find" on his property near Nevada City in California's Gold Country made news last year, Australian prospector Murray Cox compared pictures of Sanders' "Washington Nugget" with "The Orange Roughie" he unearthed near Melbourne in 1987, the San Francisco Chronicle reported.