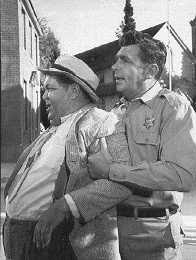 He took him in and is now housing him and feeding him.

I'd say he was being a Good Samaritan.


COOKEVILLE, Tenn. (AP) — Authorities in Tennessee say a drunken man was arrested after wandering into a church where the sheriff had been worshipping.

Sheriff David Andrews said 42-year-old Gregory Blaine Wade of Cookeville showed up Wednesday at the Jefferson Avenue Church of Christ just as a service was ending.

According to the Cookeville Herald-Citizen, an arrest report said Wade became argumentative, was unsteady and had a 40-ounce bottle of beer in his backpack. He was charged with public intoxication.

A spokeswoman at the Putnam County Jail said Monday that Wade was sentenced to 10 days in jail. He remains behind bars. There was no record that he has an attorney.