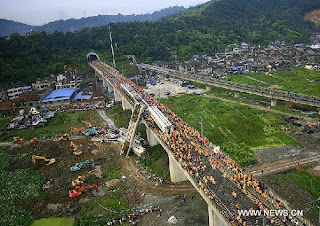 I have my doubts that the three officials will survive the investigation.

My condolences to the victims and their families.


SHANGHAI, July 24 (Xinhua) -- Three railway officials were sacked on Sunday after a train collision killed at least 35 and injured more than 200 others, the Ministry of Railway said.

Long Jing, head of the Shanghai Railway Bureau, was removed from his position after a high-speed train smashed into another train Saturday night in east China's Zhejiang Province, killing at least 35 and injuring 211.

Li Jia, head of the Shanghai railway bureau's committee of the Communist Party of China, and deputy chief of the bureau He Shengli were also dismissed from office, said the ministry.
The three will also be subject to investigation, the ministry said.
Posted by Sam at 8:10 AM