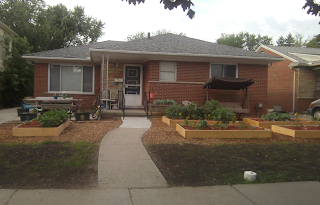 When I first saw the photo I thought boy that looks like the house I lived in when I was in high school in Oak Park, Michigan.

Was I surprised that this was in Oak Park, Michigan!

Not my house but pretty close.

Does Michelle Obama know about this?
From the agitator.com

Their front yard was torn up after replacing a sewer line, so instead of replacing the dirt with grass, one Oak Park woman put in a vegetable garden and now the city is seeing green.

Julie Bass says, “We thought we’re minding our own business, doing something not ostentatious and certainly not obnoxious or nothing that is a blight on the neighborhood, so we didn’t think people would care very
much.”

But some cared very much and called the city. The city then sent out code enforcement.

City code says that all unpaved portions of the site shall be planted with grass or ground cover or shrubbery or other suitable live plant material. Tomatoes, peppers and cucumbers are what Basses see as suitable.

“If you look at the dictionary, suitable means common. You can look all throughout the city and you’ll never find another vegetable garden that consumes the entire front yard.”

So what is suitable? From another local news report:

“If you look at the definition of what suitable is in Webster’s dictionary, it will say common. So, if you look around and you look in any other community, what’s common to a front yard is a nice, grass yard with beautiful trees and bushes and flowers,” he said.God forbid your yard doesn’t include beautiful trees, bushes and flowers. It’s your job, Oak Park citizens, to give Kevin Rulkowski pretty things to look at. According to Bass’s blog, she’s demanding her right to a jury trial. So the city plans to throw the book at her.

"Our attorney spoke to the prosecutor today. (for the record, my crush on him is totally finished after today.)
his position: they are going to take this all the way.
officially, this means I am facing 93 days in jail if they win.
no joke."
Posted by Sam at 8:06 AM