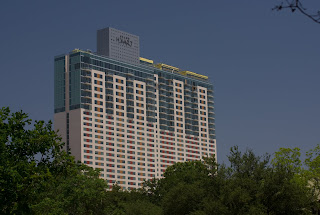 No doubt housekeeping is a tough job.  I don't know how the Hyatt could change conditions however.

Manual labor is tough especially as you get older.

If you don't have other skill sets what else can you do?

10 arrested at protest of Hyatt downtown
They blocked Market Street at end of rally, part of a national union demonstration.
By Jazmine Ulloa - Express-News


Ten people were arrested at the end of a downtown demonstration Thursday in which almost 200 hotel employees and supporters gathered to denounce what they called unfair and abusive working conditions at local Hyatt properties.

Wearing red and white, activists chanted and sang, holding signs as they picketed outside the Grand Hyatt San Antonio on Market Street, part of a national protest.

Workers talked about their experiences at San Antonio's two downtown Hyatt properties, and several housekeepers even re-enacted making beds in a performance highlighting their plight.