Domestic violence on the Prairie 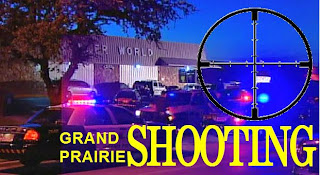 GRAND PRAIRIE, Texas — A gunman opened fire at a child's birthday celebration at a Texas roller rink, killing five people, wounding four others and then killing himself as the private party turned to panic and some fled screaming in their skates, police and witnesses say.

Authorities ascribed the gunman's rampage to an apparent domestic dispute and said no young children or rink employees were killed during the shooting that erupted about 7 p.m. at Forum Roller World in Grand Prairie, about 20 miles west of Dallas. Some people at nearby businesses said they watched as adults and children spilled from the rink in horror.

"They just looked terrified," Cody Poston, a witness, told WFAA-TV, outside the rink that was festooned with birthday decorations. "There's several people crying. The kids were just kind of oblivious."