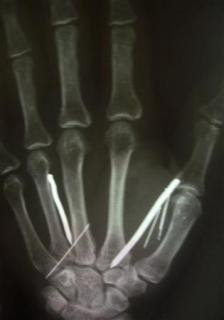 What can anyone say about this?

This couple needs to be put in prison for this.

(Reuters) - A Saudi couple tortured their Sri Lankan maid after she complained of a too heavy workload by hammering 24 nails into her hands, legs and forehead, officials said on Thursday.

Nearly 2 million Sri Lankans sought employment overseas last year and around 1.4 million, mostly maids, were employed in the Middle East. Many have complained of physical abuse or harassment.

Her family only realized what had happened to her when she complained of pain and they took her to see the doctor, Foreign Employment Bureau officials said.

"The landlord and the wife of the landlord hammered 24 nails into her when she complained of the heavy workload," Kalyana Priya Ramanayake, media secretary of the Foreign Employment Bureau, told Reuters.

Ariyawathi has been taken to hospital for surgery to remove the nails, which according to the maid were hammered in when they were hot.

X-rays showed one- to two-inch nails in her hands and legs, with one over her eyes, officials said.

The Foreign Employment Bureau is consulting the Attorney-General while the Sri Lankan External Affairs Ministry is to take the matter up with the Saudi government, officials said.
Posted by Sam at 1:37 PM