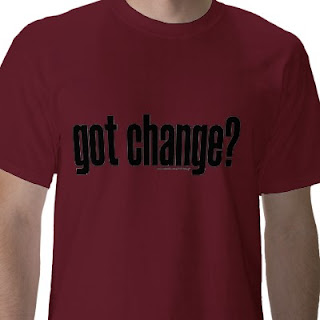 Change for a Million?

Sorry, I'm all tapped out this week.

ABU DHABI, United Arab Emirates (AP) -- Can you break a $1 million?
Not a chance. But the story is rich in audacity.
A man from the Ivory Coast is in police custody in Abu Dhabi after allegedly persuading a woman to try to exchange two phony $1 million bills at the UAE's Central Bank.
Police say the suspect promised the woman a 30 percent cut after the bills were traded - presumably for U.S. bills or UAE dirham. The suspect was identified in press reports Sunday only by the initials A.B.
The phony notes feature the $1 portrait of George Washington and are mostly black and white on the front.
The National newspaper quotes Col. Rashid Mohammed Bursheed, the head of the organized crime unit, as saying the suspect claims he thought the bills were real.
Posted by Sam at 8:55 AM