Back to the old duck and cover? 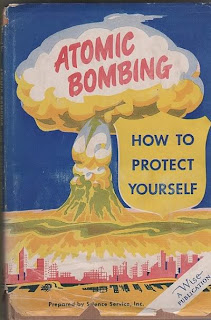 God help us all.  This Administration will do nothing to prevent Iran from proceeding to develop and get nuclear weapons.  If it doesn't already possess at least one nuclear device right now.

See here where the Prime Minister says Iran has one:

We are essentially shutting down our space program and Iran is building a three-stage rocket to putatively put a satellite into orbit.

Need I mention it would be capable of striking pretty much anywhere in the United States?

You know bringing us samples of the peaceful nuclear research and industriousness of the Iranian regime.

In a bit of irony today is the 65th anniversary of the nuclear bombing of Hiroshima.

"The country's scientists are working on a three-stage rocket that will take us to 1,000 kilometres," Ahmadinejad, quoted by Fars, told a local television in the western city of Hamedan.

He said the rocket's engines would have a thrust of between 120 and 140 tonnes, four times greater than the rocket thrust used to launch Iran's first satellite into space in February 2009.

The launch of Iran's first satellite, named Omid, stirred a wave of criticism from Western countries which fear the potential uses of the Islamic republic's ambitious space programme.