No matter how you slice it its a tax!! 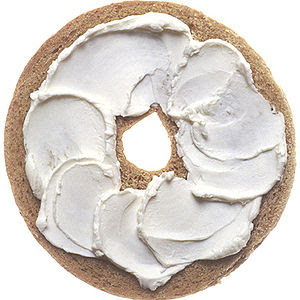 Taxing a bagel with a schmear?  What has the world come to?


Have you noticed bagel shops tacking on a few more cents to your beloved pumpernickel and cream cheese? Blame Albany.
Bagels – however you slice them – most likely haven't been subject to tax at your favorite neighborhood shop.

But, desperate for cash, Albany began enforcing a little known clause in its sales tax code that calls for a tax on sliced bagels or whole bagels consumed at the place of purchase, according to The Wall Street Journal.
When an audit found New York chain Bruegger's Bagel in violation of this often unenforced clause, the state demanded owner Kenneth Greene cough up a "significant" amount in taxes to cover what the state figured he owed, according to the Journal.
Customers bristled at the additional charge – roughly 8 cents a bagel -- blaming the franchise for trying to squeeze every penny out of patrons in a tough economy. The backlash prompted Greene to post signs near the cashiers explaining the cost increase.
"New York State is requiring that all sliced bagels and all food eaten on our premises be taxed. We apologize for this change and share in your frustration on this additional tax," the signs read, according to the Journal.
Bruegger's appears to be the only major franchise cracked down on thus far, and Florence Wilpon, one of the founding owners of Manhattan's Ess-a-Bagel, told the Journal she hoped it stayed that way.
In the meantime, a spokesman for the tax department told the paper the state "will provide additional guidance via our Web site and publications in the near future."
Earlier this month, the state passed one of its latest budgets ever to contend with a $9.2 billion deficit. The budget included hikes on cigarette taxes, eliminating the sales tax emeption on clothing and shoes costing under $110 and slicing charitable deductions for New Yorkers making $10 million a year in half, among other clauses.
Posted by Sam at 1:42 PM