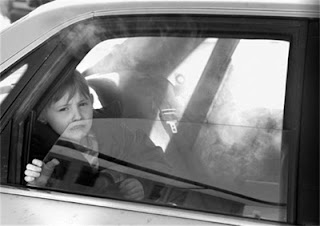 Does CPS know this?

I also like the descriptive phrase used by the doctor saying there is a "tsunami of obesity".

BBC News - Smoking in the car is child abuse, GP Steve Field warns
Parents who smoke in cars in front of small children are "committing a form of child abuse", a leading GP has said.

Professor Steve Field, chairman of the Royal College of General Practitioners, has condemned society's attitudes to food, alcohol and cigarettes.

In a letter to the Observer newspaper, he said parents had to take more responsibility for their children's health - and set a good example.

He said irresponsible behaviour led to high levels of disease and early death.
He called on parents, mothers-to-be, the obese, smokers and drinkers to turn into healthy role models for their children.

Professor Field, who represents 42,000 GPs across the UK, added: "I suppose the same people also smoke at home in front of their children.

"Evidence from the US indicates that more young children are killed by parental smoking than by all other unintentional injuries combined."

Other health experts have previously called for smoking to be banned in cars when children are present, but the government's recent decision not to review existing smoking legislation means that move is unlikely.