Fourth Down and the punt was blocked 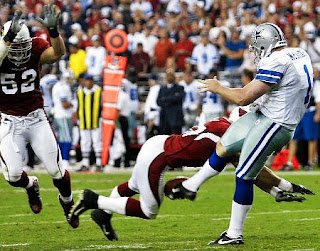 What a shame of a wasted life and potential.

Ex-football star gets 15 years for robbery
SEGUIN — A former Matador football star received a 15-year prison sentence Thursday afternoon from a jury that found him guilty of one count of aggravated robbery in a home invasion that occurred in May 2009.

Marcus B. Richardson, 22, had been indicted on two counts of aggravated robbery and one count of aggravated sexual assault. The offenses were alleged to have occurred on May 18, 2009 at a residence on Blanks Street in Seguin.