School Board out of control? 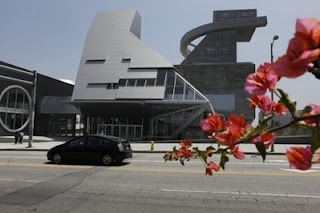 Is it any wonder that California is going belly-up?  I mean a half-Billion dollar school for 4200 students?

Not to mention the idiocy of having one campus for K-12 students.  I don't care if it has gold-plated toilets its worthless unless you get good teachers and programs in the classrooms.  The school district has a 50% drop out rate.

Will this school help decrease that rate?  I sincerely doubt it.

LOS ANGELES – Next month's opening of the Robert F. Kennedy Community Schools will be auspicious for a reason other than its both storied and infamous history as the former Ambassador Hotel, where the

Democratic presidential contender was assassinated in 1968.
With an eye-popping price tag of $578 million, it will mark the inauguration of the nation's most expensive public school ever.

The K-12 complex to house 4,200 students has raised eyebrows across the country as the creme de la creme of "Taj Mahal" schools, $100 million-plus campuses boasting both architectural panache and deluxe amenities.
"There's no more of the old, windowless cinderblock schools of the '70s where kids felt, 'Oh, back to jail,'" said Joe Agron, editor-in-chief of American School & University, a school construction journal. "Districts want a showpiece for the community, a really impressive environment for learning."

Not everyone is similarly enthusiastic.

"New buildings are nice, but when they're run by the same people who've given us a 50 percent dropout rate, they're a big waste of taxpayer money," said Ben Austin, executive director of Parent Revolution who sits on the California Board of Education. "Parents aren't fooled."