What were they up to? 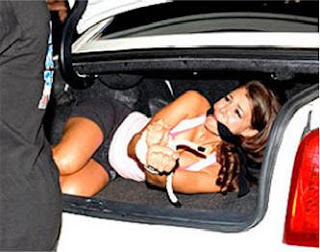 The girl will get probation, maybe the dude too.  I think at least they should get "shock" probation to give them a taste of life in the Pen.

This was a pretty blatant crime.  What were their intentions?  Why kidnap her?

San Antonio police arrested two people suspected of forcing a woman into the trunk of her car at a far North Side restaurant and then stealing the vehicle Sunday afternoon.


Priscilla Cruz, 18, and Juan Hector Guevara III, 22, were in Bexar County Jail charged with aggravated kidnapping and aggravated robbery. Bail for Cruz, who also faces one charge of possession of marijuana, was set at $201,000; Guevara is being held on $200,000 bail.

The couple reportedly approached Mary Brawner, 61, in a parking lot on Loop 1604 near Nacogdoches Road and Rolling Oaks Mall around 3:15 p.m.