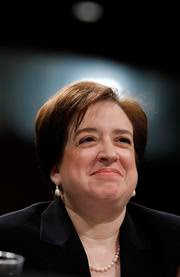 May you be guided by the Spirit of Justice in your daily tasks.

Kagan to celebrate with Obama, be sworn Saturday
By JULIE HIRSCHFELD DAVIS - Associated Press Writer
WASHINGTON (AP) -- It's all over but the celebrating and oath-taking for soon-to-be Supreme Court Justice Elena Kagan.
Kagan is joining President Barack Obama at the White House on Friday for a ceremony to mark her confirmation as the nation's 112th justice. On Saturday, she's to be sworn in at the Supreme Court as the successor to retired Justice John Paul Stevens.
The 50-year-old U.S. solicitor general, who won confirmation Thursday over Republican opposition, will be sworn in twice by Chief Justice John Roberts.
She will recite one oath as prescribed by the Constitution in a private ceremony in the high court's Justices' Conference Room, with only her family present. Then, Roberts will administer a second oath, taken by judges, with the Kagan's family and friends and reporters present.
She won't be formally installed as a justice until Oct. 1 in a courtroom ceremony at the start of the court's new term.
The rest of the story:
Posted by Sam at 6:50 AM