I mean, who knew? I just ordered Bologna. 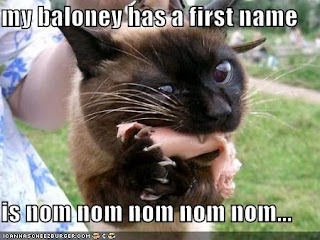 Never, ever order your bologna from Puerto Rico.  You never know what might be inside of it.

HOLYOKE, Mass.—A Massachusetts man has been arrested after a kilogram of cocaine hidden inside a hollowed out chunk of bologna was delivered to his home.

Holyoke police say they were tipped off by postal inspectors in Puerto Rico who had been investigating similar shipments. A dog confirmed the presence of drugs and the bologna was cut open.


The meat was then repackaged and an undercover postal inspector delivered it to a Holyoke address at about 4:45 p.m. on Thursday where a woman sitting on the front steps signed for it.

Police then executed a search warrant and arrested 30-year-old Juan Rodriguez on a cocaine trafficking charge.

He is scheduled to be arraigned Friday. It was not immediately clear if he had a lawyer.
Police say the cocaine had a street value of $100,000. The investigation is ongoing.
Posted by Sam at 7:16 AM