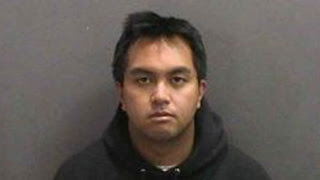 This freak is just sick!!

What in the hell is wrong with people??!!

FULLERTON, Calif. - A man was arrested Tuesday in California for ejaculating twice into a female co-worker’s water bottle.

Officers say that in January 2010, 31 year old Michael Kevin Lallana entered a female co-workers office at the Northwestern Mutual Mortgage Company in Newport Beach, California and ejaculated into a water bottle that was on her desk. The semen-filled water bottle was left on the office desk. The female later returned and drank the contents of the water bottle. The victim reported feeling ill after drinking the water.

Police say that approximately three months later in April 2010, Lallana again ejaculated into a water bottle that the same female co-worker left on her desk. Again the victim returned to her office and drank from the semen-filled water bottle.

This time, after feeling ill again, the victim sent it to a private lab to be tested.

In June 2010, the female was contacted by the private lab who confirmed that the water bottle contained semen. The victim reported the incidents to the Orange Police Department.

In early July, following further investigation by the police and the Orange County Crime Lab, the defendant was linked through DNA to the crimes. Lallana was arrested Tuesday outside of his home.

Lallana was charged with two misdemeanor counts each of releasing an offensive material in a public place and assault, with sentencing allegations for committing a crime for sexual gratification.

If convicted, he faces a sentence ranging from a minimum of three months to a maximum of three years in jail with mandatory sex offender registration.

In a disturbing story out of Maryland, a man was arrested in July for throwing semen on women who were shopping in a Michael’s Craft store and in a Giant super market.

In this case police believe the suspect, Michael Wayne Edwards, Jr., used a spray bottle to spray the semen on the women’s backs!
Posted by Sam at 4:25 PM