A whole new meaning to the term "Electric" car 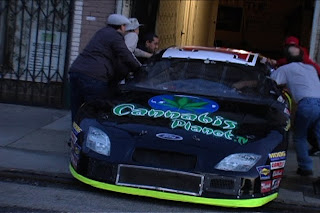 I think there will be many cars set on fire.

Nathan Armstrong envisions a day when drivers will be rolling up to the curb in a car powered by an electric motor and covered with a body made from hemp.

The green vehicle’s design will be unveiled next month at the Electric Mobility trade show in Vancouver, but the Kestrel is part of a bigger plan by a Canadian consortium — including Armstrong’s Calgary-based Motive Industries — to build an environmentally friendly car in this country.

“It’s a design program that will put all the good eggs we’ve been thinking about into one basket,” said Armstrong, Motive’s president.

Project Eve, as the currently nameless group is called, isn’t starting from scratch.

Motive had been working on an entry for the Progressive Automotive X Prize competition, which will pit vehicles that get mileage of 2.4 L/100 km or better against each other in a race.

Motive’s entry included exploring the use of a hemp-fibre composite that’s as strong as fibreglass, but lighter and less expensive.

The material will be used to replace other metal components, Armstrong said, except for the structural frame.
Steve Dallas, president of Toronto Electric, has already built a prototype two-seater electric car called the A2B that he drives to meetings.

TM4, the Quebec-based maker of electric drivetrains, is another of the 15 companies signed up to the project.

Armstrong says the first Kestrel prototype — a four-seater and the vanguard of a three-year plan that would see five models built, including a passenger van and a commercial vehicle — should be finished this year, with 20 following next year. Red Deer College would build the bodies, while SAIT would assemble the vehicles, he said.

“The idea behind it was that we weren’t just going to develop a single vehicle, we’re going to develop technologies and an architecture that would be suitable for different vehicle platforms,” Armstrong said, adding they hope to have 50 companies on board by the end of the year. “To essentially create a philosophy where we can build vehicles in Canada, but not using the very expensive business model that’s been in place for the last 20 years.”

“The core focus of the company isn’t to develop the Kestrel or other vehicles, but develop advanced transportation technologies,” Armstrong said.

While the obvious jokes about a hemp car abound — hemp is cannabis but contains negligible amounts of THC — Armstrong points out that Henry Ford built a car with a hemp body in 1940.

“It’s not a direct replacement,” Armstrong said of swapping the hemp for existing materials.

“You have to design the cars differently, which is where we come in.

“The real savings are in the manufacturing. When you look at the big picture, the big (factors) to consider are manufacturing costs and energy requirements.”

He added that because the hemp composite would already be processed, it could be exported to the United States.

Dallas says the idea of electric cars is gaining momentum.

“Everybody wants to know more,” he added.

Enmax, for example, has launched a three-year pilot project to replace 10 of its vehicles and another 10 City of Calgary vehicles with electric cars.