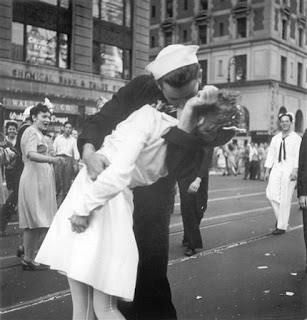 What a way to celebrate the anniversary!


Hundreds kiss in NYC in honor of end of WWII


NEW YORK (AP) -- Hundreds of couples donned sailor hats and nurse's caps and smooched in Times Square on Saturday to celebrate the 65th anniversary of the end of World War II.
The couples were re-enacting the famous Life magazine photograph of a nurse being passionately kissed by a sailor at the end of the war. A 26-foot statue replicating the original photo was also erected for the celebration.
World War II veterans and their children on hand for the kiss said they want today's generation to remember the sacrifices of those who fought in the war.
"I want to keep that day alive," said Rocco Moretto, 86, a retired infantry staff sergeant now living in Queens.
Moretto, who stormed Omaha Beach on D-Day and arrived in Times Square in his uniform, kissed his friend Margie Zwick, who served in the Women's Army Corps.
"It was terrific," he said of the kiss. "It's been a long time coming."
The Keep the Spirit of '45 Alive! grass roots campaign was holding a series of events around the country marking the day.
Edith Shain, who said she was the nurse in the original photo, died in June at the age of 91.
Posted by Sam at 8:04 AM